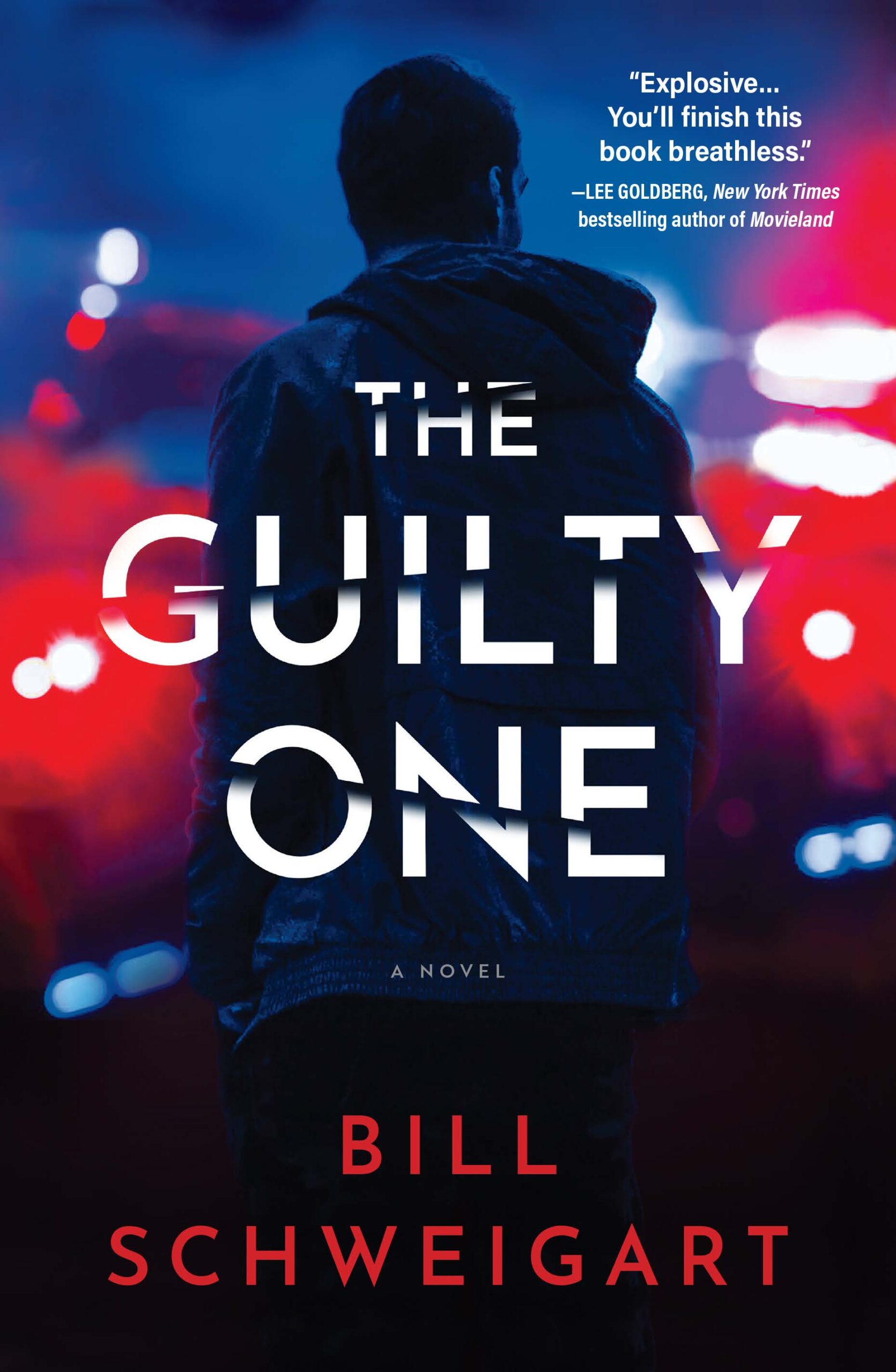 A hero cop thwarts a brutal murder and can’t remember a thing about it. But memories return—and so do the nightmares in this breathlessly paced thriller for fans of David Ricciardi and Michael Connelly.

Every town needs a hero—and Detective Cal Farrell fits the bill. He stopped an active shooter six months earlier, and now he’s become the darling of the Alexandria press. The problem is that Cal remembers nothing from that day. He’s working with a psychiatrist to recover his memories, but hasn’t had much luck.

Then, on one of his morning runs, he is once again the first on scene for a grisly discovery—a body hanging impossibly high on a tree. Soon there’s another victim, killed by a blade and dumped in a ravine. As the bodies begin to stack up, each staged more gruesomely than the last, Cal sees a baroque pattern to the crimes that no one else seems to understand—something out of legend.

As Alexandria dubs the serial killer “Old Town Jack,” Cal learns that the only thing a city loves more than creating a hero is tearing one down. And if he can’t get to the truth, this hometown hero might just be next in line for destruction.

Brisk, [and] action-packed . . . Readers will hope they haven’t seen the last of this well-developed lead.Publishers Weekly
A suspenseful, dark and twisty story . . . One that captures your attention early and keeps a tight death grip on you throughout.Best Thriller Books
A raw, visceral, hard-charging police procedural and a relentless thriller packed into one explosive novel. You’ll finish this book breathless.Lee Goldbeg, New York Times bestselling author of Movieland
The Guilty One is the perfect kind of crime novel. Crackling with suspense and chock full of compelling characters, this book grabs you by the throat and never lets go. I absolutely loved it!Don Bentley, New York Times bestselling author of Hostile Intent
Skillfully executed and fast-paced, Bill Schweigart’s The Guilty One will haunt you long after reading the final page. Brilliant!Bruce Robert Coffin, award-winning author of the Detective Byron Mysteries
Bill Schweigart’s The Guilty One is a brutal, bloody blast. The plot moves like a rollercoaster, the dialogue snaps like a whip, and the pages practically turn themselves.Andrew Bourelle, author of 48 Hours to Kill and Heavy Metal
The Guilty One is a fast, fun, incredibly thrilling novel, as well as a compelling argument for the necessity of police work and a deep examination of its costs. Or I could keep it short and sweet: Bill Schweigart is REALLY good. Read this book!Nick Petrie, author of The Runaway
Go to top

The people closest to you can be your most dangerous enemies in this heart-pounding collection of 3 brand-new thrillers from the master of suspense.

3 Days to Live: A CIA-agent bride is on her European honeymoon when she and her husband are poisoned—leaving her seventy-two hours to take revenge
(with Duane Swierczynski).

Women and Children First: When a deal goes bad on a tech executive in Washington, DC, he turns an order to kill his family into a chance to relive his military glory days
(with Bill Schweigart).

The Housekeepers: A Los Angeles doctor trusts her two housekeepers, but when she’s murdered in a botched attempt to steal drugs, the pair of grifters vie to control their former employer’s estate—facing off against the Russian mob
(with Julie Margaret Hogben). 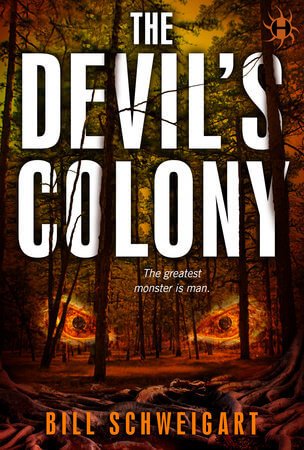 The greatest monster is man. From the author of The Beast of Barcroft and Northwoods comes a chilling descent into the depths of horror and human depravity.

Ben McKelvie had a good job, a nice house, a beautiful fiancée . . . until a bloodthirsty shapeshifter took everything away. Ever since, he’s been chasing supernatural phenomena all across the country, aided by dedicated zoologist Lindsay Clark and wealthy cryptozoologist Richard Severance.

Now they face their deadliest challenge yet. In the New Jersey Pine Barrens, a man named Henry Drexler operates a private compound called Välkommen, which is Swedish for “welcome.” Indeed, Drexler welcomes all visitors—so long as they’re racists, neo-Nazis, or otherwise in cahoots with the alt-right. But Drexler is no mere Hitler wannabe. Once he was Severance’s mentor, and his research may well have summoned a monster to the Pine Barrens.

To find out the truth, Ben and Lindsay must enter the camp incognito. There, under the watchful eyes of Drexler’s bodyguards and sociopathic son, they will learn that the most dangerous beasts lurk in the human heart.

Readers who appreciate a B-movie sensibility, affable characters, and a sense of fun along with their scares will find much to enjoy.Publishers Weekly, on The Beast of Barcroft
[An] appealing and original series . . . With its vivid descriptions and realistic but sympathetic characterizations, Northwoods will stay with the reader long after the last page is turned.New York Journal of Books
Go to top 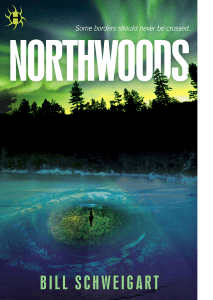 Some borders should never be crossed. From the author of The Beast of Barcroft comes a waking nightmare of a horror novel that’s sure to thrill readers of Stephen King and Bentley Little.

Ex–Delta Force Davis Holland, now an agent for the Customs and Border Patrol, has seen it all. But nothing in his experience has prepared him for what he and the local sheriff find one freezing night in the Minnesota woods.

Investigating reports of an illegal border crossing, the two men stumble across a blood-drenched scene of mass murder, barely escaping with their lives . . . and a single clue to the mayhem: a small wooden chest placed at the heart of the massacre. Something deadly has entered Holland’s territory, crossing the border from nightmare into reality.

When news of the atrocity reaches wealthy cryptozoologist Richard Severance, he sends a three-person team north to investigate. Not long ago, the members of that team—Ben McKelvie, Lindsay Clark, and Alex Standingcloud—were nearly killed by a vengeful shapeshifter. Now they are walking wounded, haunted by gruesome memories that make normal life impossible. But there is nothing normal about the horror that awaits in the Northwoods. 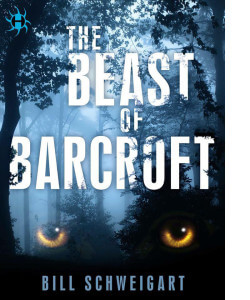 The Beast of Barcroft

Ben thought he had the neighbor from hell. He didn’t know how right he was.

Ben McKelvie believes he’s moving up in the world when he and his fiancée buy a house in the cushy Washington, D.C., suburb of Barcroft. Instead, he’s moving down—way down—thanks to Madeleine Roux, the crazy neighbor whose vermin-infested property is a permanent eyesore and looming hazard to public health in THE BEAST OF BARCROFT.

First, Ben’s fiancée leaves him; then, his dog dies, apparently killed by a predator drawn into Barcroft by Madeleine’s noxious menagerie. But the worst is yet to come for Ben, for he’s not dealing with any ordinary wild animal. This killer is something much, much worse. Something that couldn’t possibly exist—in this world.

Now, as a devilish creature stalks the locals, Ben resolves to take action. With some grudging assistance from a curator at the Smithsonian’s National Zoo and the crackpot theories of a self-styled cryptozoologist, he discovers the sinister truth behind the attacks, but knowing the Beast of Barcroft and stopping it are two different animals. 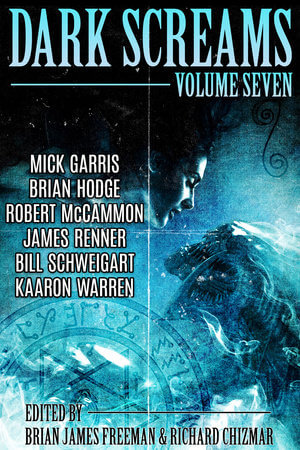 LIZARDMAN by Robert McCammon
The lizardman thinks he knows about all the mysterious dangers of the Florida swamps, but there are things lurking in the bayou that are older and deadlier than his wildest dreams.

A MONSTER COMES TO ASHDOWN FOREST (IN WHICH CHRISTOPHER ROBIN SAYS GOODBYE) by James Renner
Although every child dreams of visiting Hundred Acre Wood, only one has ever actually frolicked in that fabled forest—and survived.

FURTHEREST by Kaaron Warren
She’s been going to the beach since she was a child, daring the other kids to go out past the dunes where those boys died all those years ago. Now she realizes that the farther out you go, the harder it is to come back.

WEST OF MATAMOROS, NORTH OF HELL by Brian Hodge
After the success of their latest album, Sebastián, Sofia, and Enrique head to Mexico for a shoot under the statue of Santa Muerte. But they have fans south of the border who’d kill to know where they get their inspiration.

THE EXPEDITION by Bill Schweigart
On a quest to bring glory to the Führer, Lieutenant Dietrich Drexler leads his team into the ruins of the Carpathian Mountains. But the wolf that’s stalking them is no ordinary predator.

SNOW SHADOWS by Mick Garris
A schoolteacher’s impulsive tryst with a colleague becomes a haunting lesson in tragedy and terror when he’s targeted for revenge by an unlikely, unhinged rival. 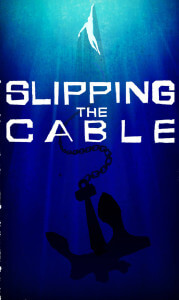 Kelly Sensor is the newest junior officer aboard the Sentinel, a Coast Guard cutter where a typical day at the office means lethal drug smugglers, treacherous storms, and dangers only the sea can conjure. When Kelly runs afoul of his vengeful captain, Aregood, shipboard life truly becomes deadly. After their battle of wills puts Sentinel on a collision course with disaster, Kelly hopes to escape to Key West, but paradise quickly becomes a dead end when Aregood pursues him.

Slipping The Cable is former Coast Guard officer Bill Schweigart’s debut novel. This taught nautical thriller is a fresh entry to the tradition of the sea novel, where everyone is confined aboard ship, tensions run high, and the setting itself is deadly, though not nearly as deadly as the characters. If you’ve ever suffered an impossible boss, ever wanted to fall off the grid and start over fresh, or just wanted to lose yourself in a high seas and high stakes adventure, Slipping The Cable is a must read.

“Smart, tough, fast-paced, this gripping first novel is a white-knuckle tour by a writer to be reckoned with.” — Janet Peery, Author of The River Beyond the World 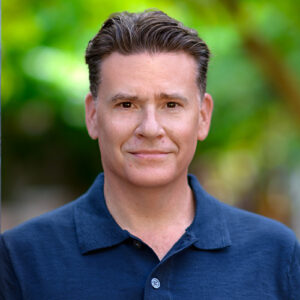 Bill Schweigart · 2 days ago
@BillSchweigart
IN MY DEFENSE the ice cream birthday cake I bought for my daughter this afternoon and put in the refrigerator was much easier to cut tonight.
View on Twitter
0
6
Bill Schweigart · 6 days ago
@BillSchweigart
B&N is once again doing their 25% off pre-order promotion. I have a couple of ideas how you could put it to good use! #TheGuiltyOne #3DaysToLive https://t.co/f4MpGQVa1g
View on Twitter 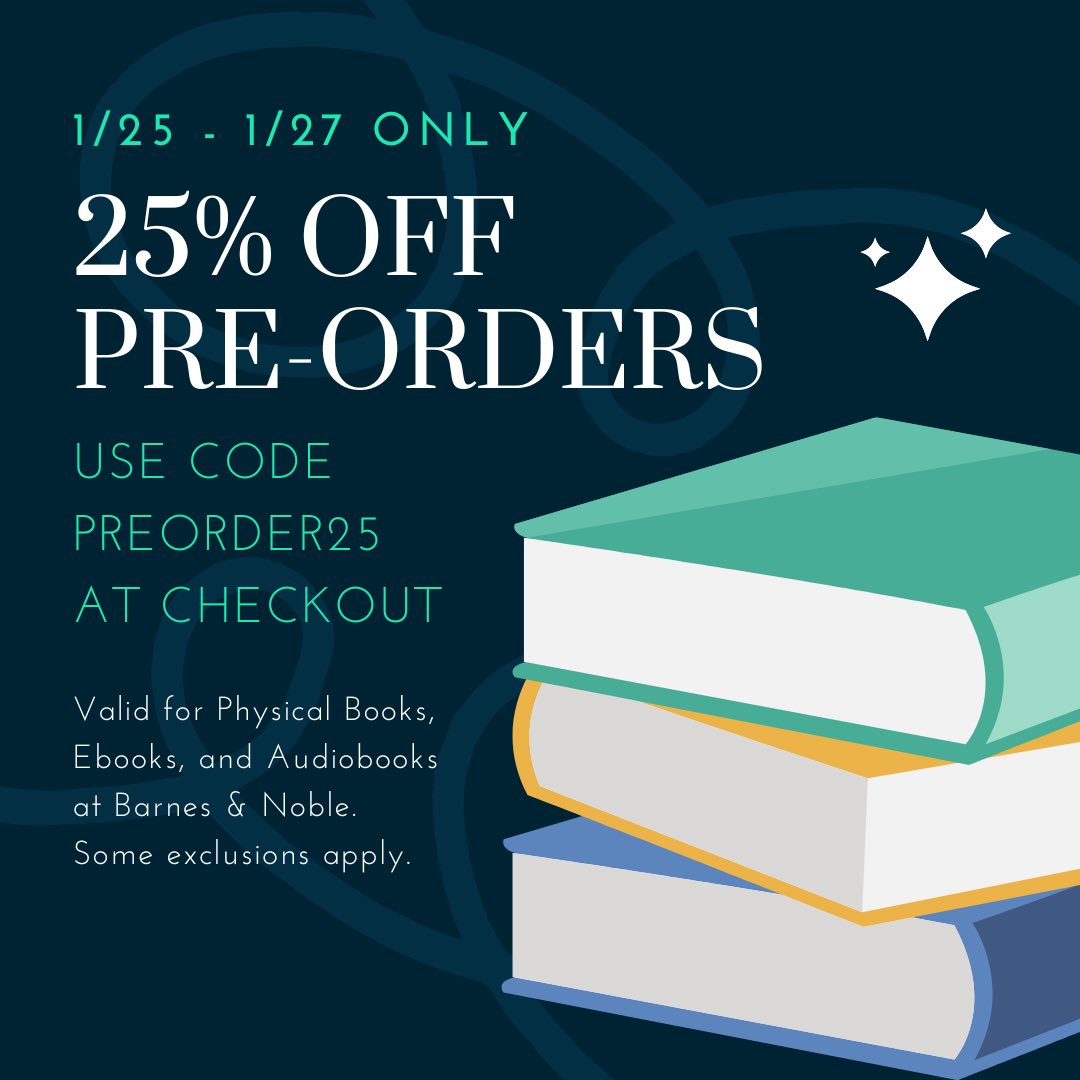 1
5
Bill Schweigart · 7 days ago
@BillSchweigart
🚨🚨Enter, everyone!🚨🚨 or maybe don’t so it improves my chances I didn’t think this tweet through https://t.co/KXEiB5sRJd
View on Twitter 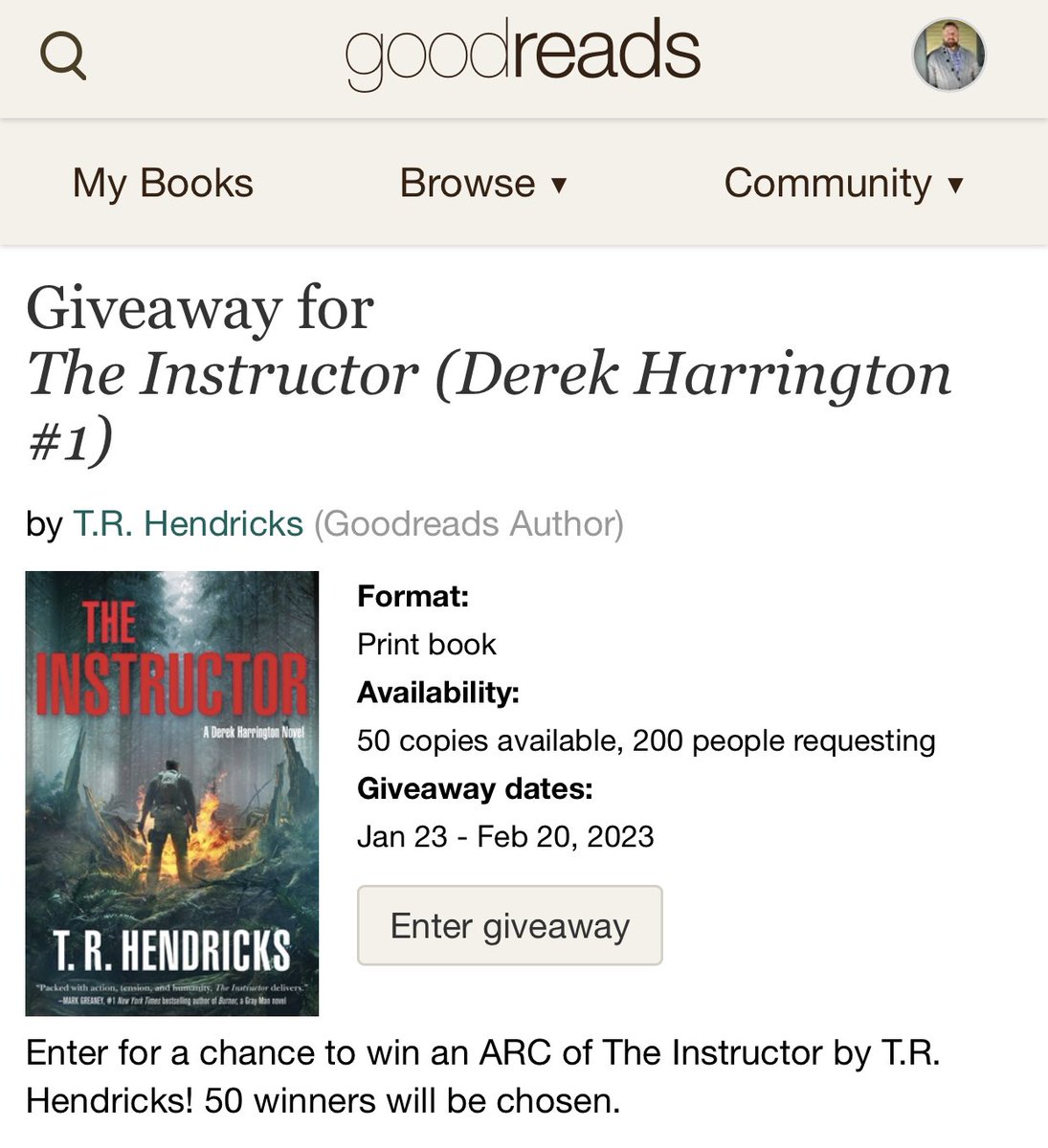 Tim Hendricks@TR_Hendricks
CHECK IT OUT!!!

Missed out on the last @goodreads #ARC giveaway? Well fret no more my friends!

Bill Schweigart6 days ago
B&N is once again doing their 25% off pre-order promotion. I have a couple of ideas how you could put it to good use! #TheGuiltyOne #3DaysToLive

Bill Schweigart2 weeks ago
Never too early to wish the friendlies a Happy Valentine’s Day…and share a bit of news. 🚨❤️🚨